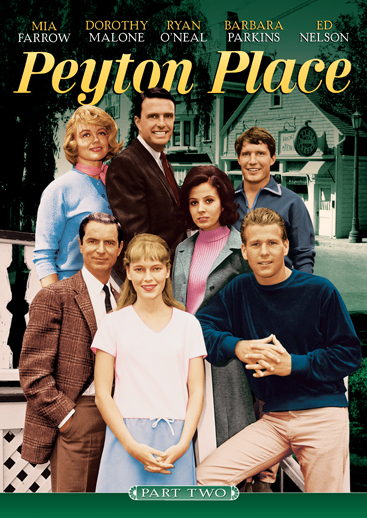 THE NEXT INSTALLMENT IN THE CONTINUING STORY OF PEYTON PLACE

The sensational "television novel" that shattered the veneer of small-town morality continues in Part Two of Peyton Place.

The winter holidays have come and gone, and the new year begins with a fresh dusting of snow and the return of Elliot Carson (Tim O'Connor) to Peyton Place. Convicted of murdering his wife, Carson has been paroled after 18 years in prison and is returning home to clear his name. This one event sets off a chain reaction that threatens to reveal the truth about the "widow" Constance MacKenzie (Dorothy Malone), destroy the innocence of her daughter Allison (Mia Farrow) and take down Leslie Harrington (Paul Langton) and his family.

Meanwhile, Betty Anderson (Barbara Parkins) has run away from her sham of a marriage to Rodney Harrington (Ryan O'Neal) and is hiding in New York, where her naïve dream of a new beginning is crushed under the realities of survival in the big city. Her beleaguered father George (Henry Beckman) goes completely insane and has to be institutionalized.

Also returning after some time away is Paul Hanley (Richard Evans), the brother of Elliot Carson's wife and the person responsible for naming Carson as the murderer. Now a teacher at Peyton College, his efforts to foster paranoia and unrest culminate in a shooting.

Behind the picket fences of the clapboard houses, beyond the historic pillory in the quaint town square, the neatly wrapped New England town continues to unravel in ways no one could have imagined . . .