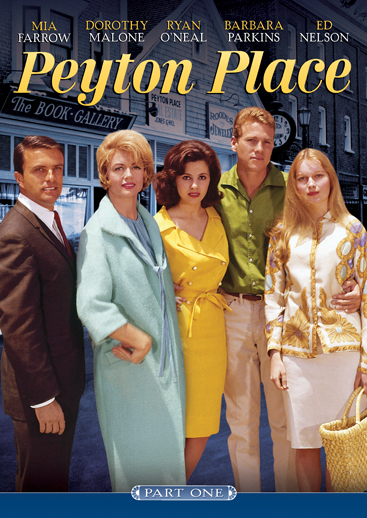 PART ONE OF THE CONTINUING STORY OF PEYTON PLACE . . .

With brilliant acting by Dorothy Malone, Mia Farrow and Ryan O'Neal among others, this superbly written and directed nighttime soap opera stretched the boundaries of what was considered morally acceptable in the pre-sexual revolution 1960s. When all was said and done, Peyton Place had won a devoted following over the course of its 514 episodes, and ABC had become a major network.

"This is the continuing story of Peyton Place," the soothing voice of benevolent town elder Matthew Swain would introduce every episode. But the stories that followed were anything but soothing. Extramarital affairs, unwed teen pregnancies, family betrayals, mental illness and even murder were all lurking behind the storybook façade of this picture-perfect, centuries-old New England village and its citizens.

From the day Dr. Michael Rossi arrives at Peyton Place to assume his role as town doctor, some of the townspeople's lives begin to unravel, revealing unexpected and intersecting relationships long-hidden by secrets and lies. The widow Constance MacKenzie and her innocent daughter Allison; the troubled brothers Norman and Rodney Harrington and their powerful father Leslie; struggling George and Julie Anderson and their love-struck daughter Betty; and the mysterious Elliot Carson are all revealed to be much more than they appear in these first 31 episodes.

This is the beginning of the continuing story of Peyton Place.