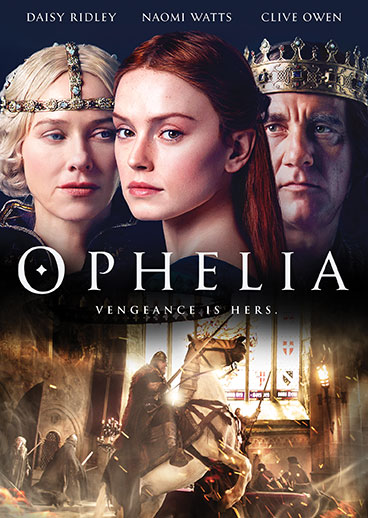 "Vigorous, colorful and clever ... smartly rethinks both the play and the character, making her a far more proactive figure than Shakespeare did ..." – The Hollywood Reporter

One of the world's greatest dramas is turned on its head through a bold, new perspective in Ophelia. Set in medieval Denmark and spoken in a modern tongue with a poetic twist, it recalibrates the classic Shakespearean tragedy of Hamlet so that its unspoken, complex heroine may share her own story. As a rebellious and motherless child, Ophelia (Daisy Ridley, Star Wars: The Rise Of Skywalker) is taken into Elsinore Castle by Queen Gertrude (Naomi Watts, Mulholland Drive) as one of her most trusted ladies-in-waiting. Soon enough, Ophelia captures the affections of the young Prince Hamlet (George MacKay, Captain Fantastic). In secret, a passionate romance ignites between the two as the kingdom is on the brink of war amidst its own political intrigue and betrayal. When Hamlet's father is murdered, and the prince's wits begin to unravel into an insatiable quest for vengeance, Ophelia sharply navigates the rules of power in Denmark all while struggling to choose between her true love and her own life.