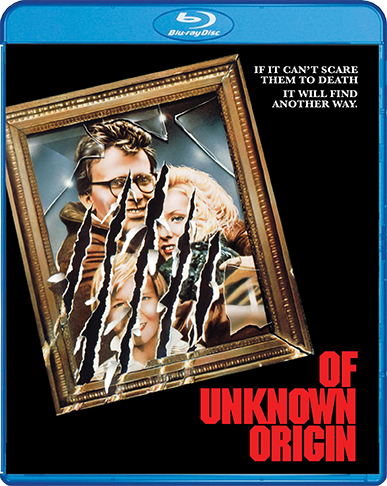 When not mired in the corporate rat race, Wall Street executive Bart Hughes is king of his sleek Manhattan brownstone ... until he finds his castle under siege by the most determined of home intruders. Forced to enter a rat race of an entirely different sort, Bart takes a stand, with his survival and sanity at stake.

Peter Weller (RoboCop, Sons of Anarchy) stars in Of Unknown Origin, an eerie and nerve-tingling suspense thriller directed by George P. Cosmatos (Tombstone, Cobra) and the winner of Paris International Film Festival Awards for Best Picture and Actor. Cleverly and compellingly, the film draws you into a battle of wits, namely one with an intruder that's formidable, persistent and clever enough to lure Bart (Weller) along on an unwitting path to self-destruction. In the battle of man vs. beast, push has come to scream.

“Of Unknown Origin is a film that is likely to receive more praise on Blu-ray than it ever did on VHS or DVD. In the age of movies like it getting renewed interest, it’s bound to have a resurgence. Scream Factory’s treatment of the title is top of the line and is one of their more surprisingly entertaining catalogue titles in recent memory. Highly recommended.” – Tim Salmons, The Digital Bits

“Of Unknown Origin is a plain FUN movie. Scream Factory has given us a great looking remaster, and the extras are actually rather beefy. Well worth snagging if you love the genre.” – Michael Scott, AV Nirvana

“Thank God for Scream Factory, who resurrects hidden gems and forgotten genre films and gives them new life. Without this new high-definition release of Cosmatos’ film, I may have never experienced the joy – dare I say, the jubilation – of watching Buckaroo Bonzai don a miner’s headlamp, cleats, and protective gear while fighting a Schnauzer-sized rat with a homemade morning star. It’s the stuff dreams (and a few nightmares, I suppose) are made of. If you haven’t seen this movie, you’ve got to pick up a copy right now and bear testimony to its brilliance.

Lucky for you, Scream Factory’s new Blu-ray is a definitive release that makes Of Unknown Origin an easy blind buy.” – Adam Frazier, Geeks of Doom

“Scream Factory has released Of Unknown Origin on Blu-ray with a new 2k scan of the interpositive, and I must say that it looks quite impressive…The transfer is crisp and clean with no damage, and Scream Factory has done a great job with this 2k scan.” – Ryne Barber, Cultsploitation

“Of Unknown Origin is a terrific bit of fun watching Peter Weller descend into madness while trying to kill a rat in his home.  Scream Factory releases another Warner Bros title (YAY!) with a very good picture and audio presentation. The interviews provided with this release are solid and complimentary. For not being a Collector’s Edition, this packs plenty and is a nice pick up.” – Brandon Peters, Why So Blu

“Bottom line is, Of Unknown Origin is another classic Warner Bros. title that has been given the Scream Factory treatment and deservingly so.” – AlienBee.net