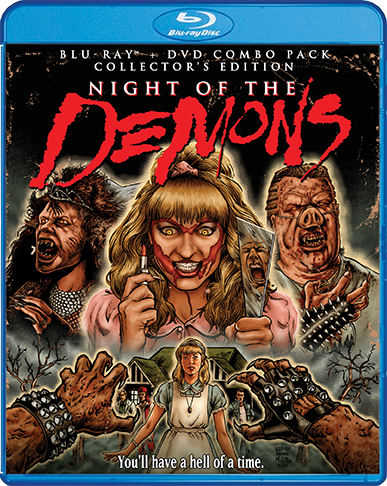 The Complete Unrated Version With Extra Gore And Violence

It's Halloween night and Angela is throwing a party...but this is no ordinary Halloween party. Everybody's headed to Hull House, a deserted funeral home, formerly the home of a mass murderer. But when the partygoers decide to have a séance, they awaken something evil...and these party crashers have a thirst for blood. Now it's a battle to survive the night in Hull House.

“’Night of the Demons’ is one of the 80′s great legacies in horror.” — Horror News

“You'll have a hell of a time. Fans will want to rush out for Night of the Demons (Blu-ray). The audiovisual upgrade is simply fantastic, and the extras are pretty much definitive. I can't imagine a better edition of the film. If you're not a fan and haven't given the film a try, it's a wonderful slice of eighties horror that fans of the era should definitely check out.” — DVD VERDICT

“Night Of The Demons is an essential horror film to have in your collection and now you have the best version to date from Scream Factory. So buy, watch it, lock your doors, bolt your windows, and turn off the lights. If not, nothing can protect you from Angela.” — Brad Henderson, PopShifter