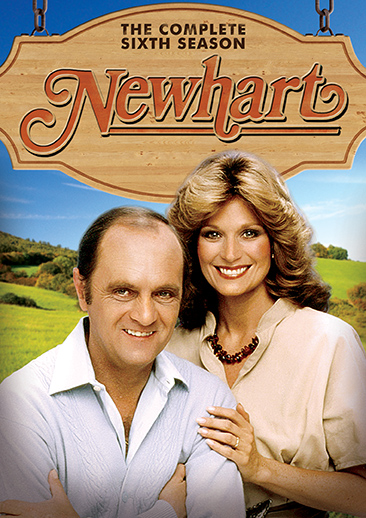 Join up with the ‘inn’ crowd on Newhart!

The inimitable Bob Newhart is back for another hilarious helping of off-kilter comedy in the sixth season of the delightfully daffy Emmy®-nominated sitcom, Newhart.

Season Six finds innkeeper, author, and television host Dick Loudon (Newhart) and his wife Joanna (Mary Frann) facing a whole new batch of comic misadventures as they contend with running the Stratford Inn as well as the oddball natives of their quaint Vermont town. However, their quirky companions – handyman George (Tom Poston), queasily cutesy couple Michael (Peter Scolari) and Stephanie (Julia Duffy), and those brothers in buffoonery, Larry (William Sanderson), Darryl (Tony Papenfuss), and "other brother" Darryl (John Voldstad) – are there to ensure that even in their own inn, the Loudons will find no shelter from the storm of silliness that surrounds them.