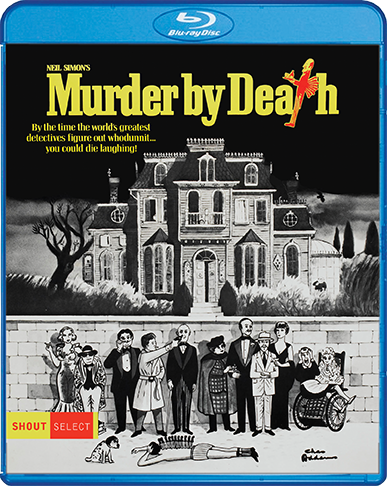 "You are cordially invited to dinner ... and a murder!"

A killer cast and a screenplay to die for await you in the mirthful mystery spoof, Murder By Death! Eccentric millionaire Lionel Twain (acclaimed author Truman Capote) has invited the world's greatest detectives to his mansion for the ultimate battle of wits. Informing his guests that a member of the dinner party will be murdered at midnight, he offers a million dollars to the sleuth who solves the crime. As the deadly game commences, Sidney Wang (Peter Sellers), Sam Diamond (Peter Falk), Dick and Dora Charleston (David Niven and Dame Maggie Smith), Milo Perrier (James Coco), and Jessica Marbles (Elsa Lanchester) must combine their powers of deduction to survive the night and preserve their reputations — or be exposed as completely clueless.

Murder By Death boasts sinister style and lethal laughs, as well as a hilarious script from the master of comedy, Neil Simon.