DUE TO THE VOLUME OF ORDERS OUR SHIPPING DEPOTS ARE PROCESSING AND DUE TO NEW SOCIAL DISTANCING PRACTICES THEY HAVE IMPLEMENTED, WE ARE EXPERIENCING SHIPPING DELAYS THAT ARE AFFECTING OUR AVERAGE SHIP TIMES. Due to the COVID-19 pandemic and current sales volume, our average ship times have been delayed.
Comedy / Romance / Sci-Fi / War / Drama / Crime / Horror / Mystery Science Theater 3000 / Film / TV

Riffer extraordinaire Mike Nelson hosts all four episodes in this 38th collection of episodes from the beloved comedy series Mystery Science Theater 3000, but the true theme here is diversity. Proving to the world that no single genre is immune to cheez, and that our hilarious heroes aboard the Satellite of Love are equal opportunity critics, we present the worst in Cold War drama, Sword and Sandals, Juvenile Delinquents and Monsters. Any investment portfolio manager who advises that diversifying risk is good way to minimize damage clearly hasn't watched enough MST3K. Behold an incredible melting pot of cinema's multicultural genres, and you will understand that in the world of cheezy movies, there is nowhere to hide.

Colossus And The Headhunters

Track Of The Moon Beast

Plus, the first 1,500 orders will receive an exclusive bonus disc, which will contain: 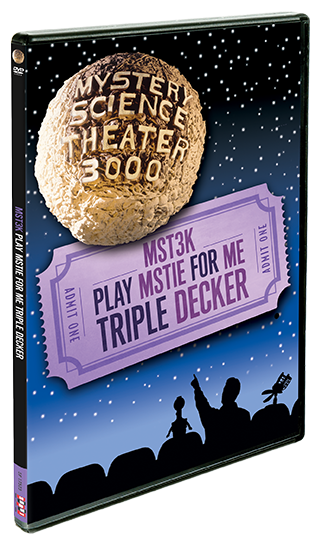 In the long tradition of show-stopping musical numbers, few have achieved as much as Mystery Science Theater 3000 has. From the golden age rock 'n' roll classic "Where Oh Werewolf" to the seasonal staple"A Patrick Swayze Christmas," Joel, Mike, Crow and Tom Servo have proven as formidable a musical force as many of the most esteemed all-human composing teams.

Now, after years of out-of-print obscurity, the Play MSTie For Me Triple Decker DVD gathers 39 of the finest MST3K musical moments into one eminently singable package sure to bring joy to the Mystery Science Theater 3000 melodic connoisseur.

Sing with Gamera. Profess your undying love for Kim Cattrall. Abandon all sense of proportion while skewering Canada. Above all, clear a small space on your shelf for this disc and enjoy watching the Satellite of Love crew sing — and laugh — their pain away.