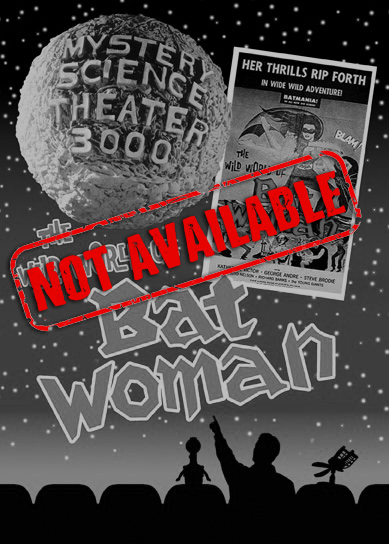 MST3K: The Wild World Of Batwoman (SOLD OUT)

In 1966 an understandable attempt to capitalize on the popularity of Batman went horribly, horribly, horribly wrong. The movie that emerged, The Wild World Of Batwoman, would have stood a better chance had it been written by Bob Kane’s dog.

There is a plot, of sorts, involving a masked babe, her team of dancing girls, a mad scientist, an atomic-powered hearing aid and an archvillain named Rat Fink. Don’t try to connect those dots. You’ll lose. Just enjoy the ample opportunities taken by Mike and his robot pals Tom Servo and Crow T. Robot to redeem the movie with barbs, cracks, digs, jabs and other assorted comic punishment.

Includes the short film Cheating, a morality tale about a high school boy whose position in student government is jeopardized by a cheating scandal. Can his comeback talk show be far behind?