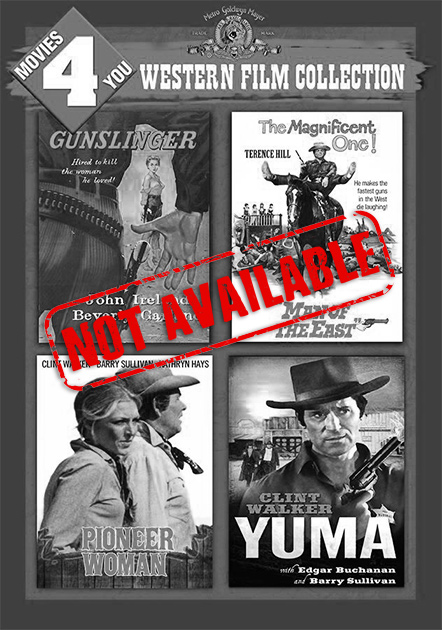 When Marshal Scott Hood is murdered his wife, Rose, takes his badge and sets out on a personal vendetta to find the killers. Meanwhile, Rose has her hands full with the unscrupulous Erica Page, the saloon-mistress, who is busy buying up local property because she has a tip the railroad is going to make the town a depot stop. In order to get away cleanly, she hires a gunslinger to kill Rose, but the hired gun quickly falls in love with his intended target.

Following his dying father's last wish, Joe is sent to the Wild West to be turned into a real man. The dreamy young man despises guns and fights, likes poems and prefers bicycles to horses. Now his three teachers need to shape him into his father’s idea of manhood. Joe fights the transformation, until he has to defend himself against Morton, a vicious gunman, who's jealous of Joe's relationship with a rancher’s beautiful daughter.

A homesteading family in 1867 Wyoming faces a crisis when the husband is killed and the wife must decide whether to remain or take her son and daughter back East.

U.S. Marshal Dave Harmon, Clint Walker, is sent to clean up the lawless western town of Yuma. Harmon is quickly embroiled in a struggle with the powerful Arch King, Morgan Woodward (Gunsmoke) after shooting King’s brother. It will take all of Marshal Harmons’s grit and determination to stop the violence and bring justice back to Yuma.