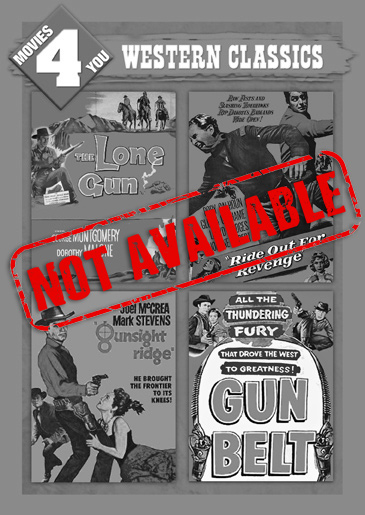 Cruze (George Montgomery), the new marshal of Marlpine and his gambler pal, Fairweather (Frank Faylen), go up against a dastardly gang of cattle rustlers led by Tray Moran (Neville Brand). Filled with brawling fistfights, corrupt card games, brutal shootouts and even a bit of romance, The Lone Gun will keep you on the edge of your seat until the action-packed final showdown!

Devious Cavalry officer Capt. George (Lloyd Bridges) gets orders to move a tribe of Cheyenne to a reservation. Marshal Tate (Rory Calhoun) is in love with the chief’s beautiful daughter (Joanne Gilbert) and thinks the Cheyenne should be allowed to stay. However, when Tate’s nephew is killed in a Cheyenne raid, he is forced into a deadly battle to save his town, save his girl, and prevent a full-scale Indian war. In a world of hate, jealously and greed, Tate must risk everything to be with the woman he loves.

When a mysterious stranger, Mike Ryan (Joel McCrea), comes to the aid of the local sheriff, he is deputized and suddenly immersed in the hunt for a prolific and deadly thief, Velvet Clark (Mark Stevens). When the townspeople demand the sheriff’s resignation, Ryan comes forward and reveals his true identity as a Wells Fargo agent and teams up with the sheriff to unmask the notorious Velvet.

Reformed outlaw Billy Ringo (George Montgomery) operates a ranch with the help of his nephew Chip (Tab Hunter) and his fiancée (Helen Westcott). When his brother, Matt Ringo (John Dehner), escapes from prison and frames him for a bank robbery, Billy is forced back into a life on the run. To prove his innocence, Billy must confront his brother, infiltrate a gang, take down an old gun-slinging rival, save Chip from a life of crime and deliver the gang to Marshal Wyatt Earp!