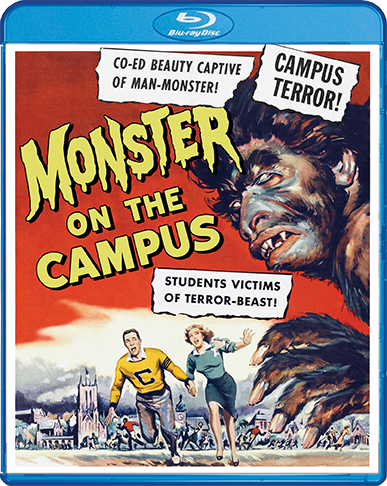 Monster On The Campus

A Monster "Born" in a College Lab!

"Atmospheric and suspenseful ... a good dose of action ... A good, old-fashioned creature feature [that] hit all the right notes and never failed to entertain" – The Telltale Mind

Fear stalks the seemingly tranquil halls of Dunsfield University with the arrival of a prehistoric fish, the coelacanth. The terror begins when a student's dog laps up water that has been contaminated by the fish and turns into a savage wolf, attacking Madeline Howard (Joanna Moore, Touch Of Evil). The school's paleontology professor, Donald Blake (Arthur Franz, The Caine Mutiny), is accidentally bitten by the coelacanth and blacks out, only to find that a hulking beast has killed one of his friends. Somehow, contact with this fish's prehistoric blood causes a total collapse of evolution, turning animals and humans into mindless, murderous monsters!

Monster On The Campus