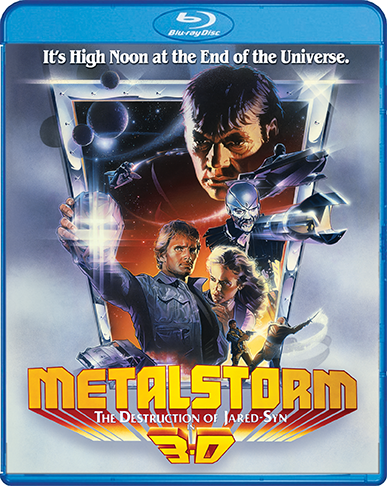 Experience the future... in 3D!

Metalstorm: The Destruction of Jared-Syn is the science-fiction battle of the ages with giant Cyclopians and an intergalactic magician in this futuristic adventure set on the desert planet of Lemuria. A miner and his daughter Dhyana (Kelly Preston, Death Sentence, Christine) fall prey to the evil dictator Jared-Syn's reign of terror. Dogen (Jeffrey Byron, The Dungeonmaster), the brave peacekeeping ranger, must save Dhyana and the rest of her planet from the brutality of Jared-Syn (Mike Preston, The Road Warrior), his son, Baal (R. David Smith, T-Force), and the hideous Cyclopian warlord, Hurok (Richard Moll, Razor). If Dogen does not find Dhyana in time, she will be sacrificed to Jared-Syn's strange life-giving crystal. Take a space-age journey into the farthest reaches of the imagination with dazzling special effects and a story that will excite fantasy fans of all ages.