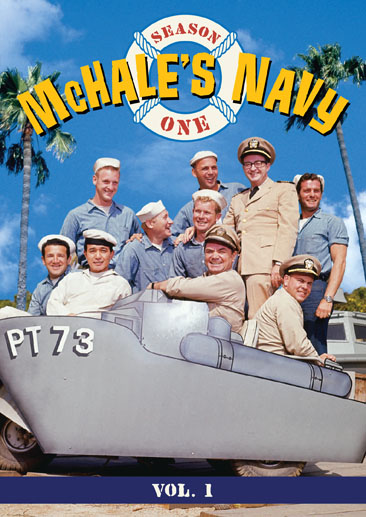 Veteran seaman Quinton McHale is commissioned into the Navy Reserve at the start of WWII. He becomes Skipper of the Torpedo Patrol (PT) Boat #73 stationed on the island of Taratupa in the Pacific. Assigned to his command are six free-spirited, good-hearted swabbies who love to have fun.

McHale and his men are constant irritants to their base commander, Captain Wallace B. Binghamton. Binghamton is forever trying to find a way to get rid of McHale and his rule-bending crew, while McHale & Co. are forever scheming to keep him from succeeding. Despite their hilarious party-boy shenanigans and utter disregard for Navy regulations, when duty calls, the crew of PT-73 does its job and does it well.

With its talented stars, great writing and solid supporting cast, including Gavin McLeod (Mary Tyler Moore Show, The Love Boat), McHale's Navy is classic television at its finest and funniest.