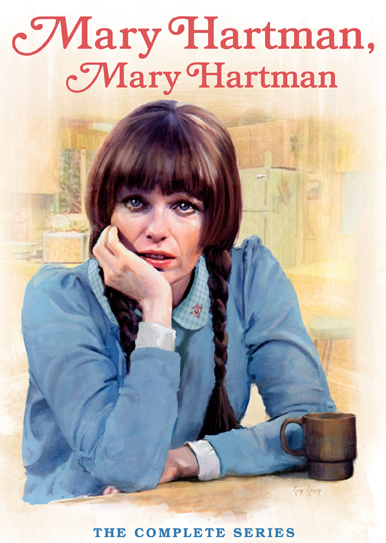 Louise Lasser delivers a masterful performance in the title role of Norman Lear’s sublimely twisted soap opera, Mary Hartman, Mary Hartman – at once a parody of the format and a twisted satire of America’s media/consumer culture.

Far too controversial for any network at the time, the incomparable Mary Hartman, Mary Hartman is finally given its due with this celebratory and definitive DVD collection.

“Probably because the targets of Mary Hartman, Mary Hartman's satire (insatiable consumerism, celebrity-obsession, television) are more relevant now than ever, the series despite its low budget, now-dated production methods and spoofing of an all but dead TV genre make it seem as fresh and funny as ever. And now it's all here, in one densely compact package. A DVD Talk Collector Series title.” – DVD Talk

“Produced by All in the Family’s Norman Lear and directed by Joan Darling and Jim Drake, this star vehicle for comic actress Louise Lasser was one of the boldest series of the seventies: a laugh-track-free send-up of soap operas that was also a surprisingly probing and intense critique of capitalism. Yes, really!” – Vulture

“Mary Hartman, Mary Hartman: The Complete Series…is 38 discs of classic quirky Norman Lear-inspired television. There are plenty of bonus features in this set, but the biggest bonus is that it will make your family seem practically normal.” – Parade

“For a program that was made when Jimmy Carter was in the White House, it has aged remarkably well, a testament to just how FAR OUT the show was during its era. Comedy tends to age poorly: early Saturday Night Live seems merely quaint outside of Bill Murray and Michael O’Donoghue’s contributions, but its contemporary, kindred-spirit-in-outrageousness, Mary Hartman, Mary Hartman is as fresh as when it first aired. It’s strangely timeless and still brilliantly funny.” – DangerousMinds.net

“If you overlooked Mary Hartman in the '70s, don’t miss this second chance to see one of the greatest TV series ever broadcast. And if you did watch it then, do what I’m doing and watch it again.” – Jeff Burger, The Morton Report