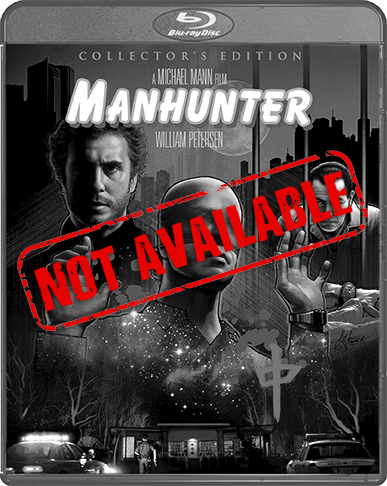 Product Note: As of August 7, 2020, this title is OUT OF PRINT. The limited edition poster has SOLD OUT.

"Superior To The Silence Of The Lambs." – Entertainment Weekly

Former FBI profiler Will Graham (William Petersen, To Live and Die in L.A., CSI: Crime Scene Investigation) reluctantly returns to his old job to track a horrific serial killer known as "The Tooth Fairy." But in order to get into the mind of this maniac, Graham must face another: Hannibal Lecktor (Brian Cox, X-Men 2, RED), the imprisoned psychiatrist whose own insanity almost cost Graham his life… and whose insights into "The Tooth Fairy" could prove as dangerous as the killer himself.

Tom Noonan (Heat, RoboCop 2), Joan Allen (The Bourne Legacy), Dennis Farina (Get Shorty), Kim Greist (Brazil) and Stephen Lang (Avatar) co-star in this gripping thriller from director Michael Mann (Heat, Miami Vice) and adapted from the novel Red Dragon by Thomas Harris. Manhunter is one of the most unnerving serial killer movies ever made.

“Manhunter is undoubtedly a cult classic and worthy of the 'Collector's Edition' treatment it has received from Shout Factory. As usual Shout Factory shows immense respect for the fans by creating new interviews that help put the film in context. Michael Mann fans will want to own this as the best version of the film to date presented in high definition. Recommended.” – DVD Talk

“I cannot recommend Manhunter high enough. It is one of my all-time favorite films, and this new Blu-ray is just a thing of beauty. So yeah, this is a must have. Go get it.” – Hell Notes

“This Shout Factory release gives viewers two cuts of the movie, along with a generous helping (fava beans not included) of bonus materials – both new and old. Fans of the movie should enjoy this set quite a bit, and I'm sure this title is going to generate more than a few new admirers of the film as well. This one is highly recommended.” – High Def Digest