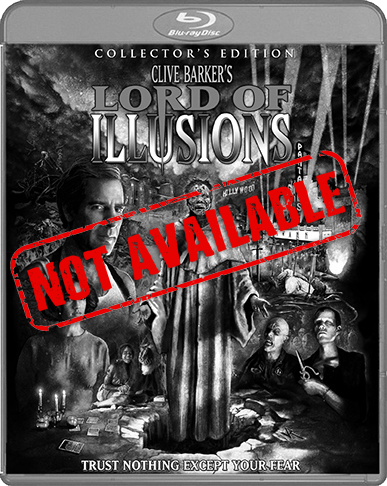 “It’s creepy to the extreme! No other filmmaker gets under the skin the way Clive Barker does” – Quentin Tarantino

From best-selling author and celebrated director Clive Barker comes a supernatural thriller that rips apart the boundaries between sanity and madness, and between the art of illusion and the terrifying forces of magic.

Scott Bakula (Quantum Leap) portrays Harry D’Amour, a private detective visiting Los Angeles on a routine investigation. Harry gets more than he bargains for when he encounters Philip Swan (Kevin J. O’Connor, The Mummy), a performer whose amazing illusions captivate the world. But are they really illusions? Harry isn’t so sure as he is thrust into a nightmare of murder, deception and terrifying assaults from the dark beyond. Famke Janssen (X-Men, Taken, Hemlock Grove) and Daniel von Bargen (Crimson Tide, The Faculty) also star.

“What Scream has added is immense…if you had any doubts on upgrading this movie, consider them squashed with this review.” – DVD News Flash

“It’s an engaging film and a really fun watch and Shout! Factory has done right by the movie with this special edition Blu-ray release.” – Rock Shock Pop

“Lord of Illusions is another one of those movies that just gets better with age and what Scream Factory has done here is just add more awesome to an already awesome classic.” – Alien Bee