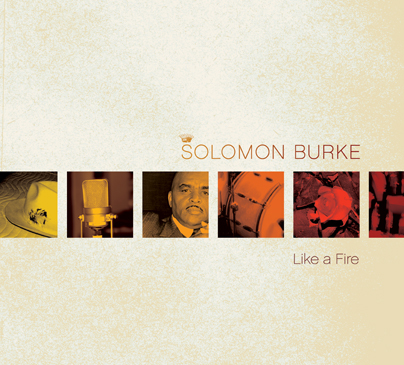 Like A Fire, Solomon Burke's third Shout! Factory release-following the GRAMMY -nominated albums Make Do With What You Got and Nashville-features songs written specifically for the GRAMMY-winning King of Rock 'n' Soul by an all-star group of songwriters, including Eric Clapton, Ben Harper, Jesse Harris, and Keb' Mo', who just happen to be some of his biggest fans.

Eric Clapton wrote the title track and co-wrote "Thank You" with Solomon. Ben Harper duets with Solomon on his composition, "A Minute To Rest And A Second To Pray." And Keb' Mo' and Jesse Harris (writer of Norah Jones' "Don't Know Why") each play guitar and sing backing vocals on their songs. Like A Fire was produced by Grammy-winning master drummer Steve Jordan, who has worked with Bob Dylan, Keith Richards, Stevie Wonder, John Mayer and countless other greats, and who also wrote three tracks for the album.