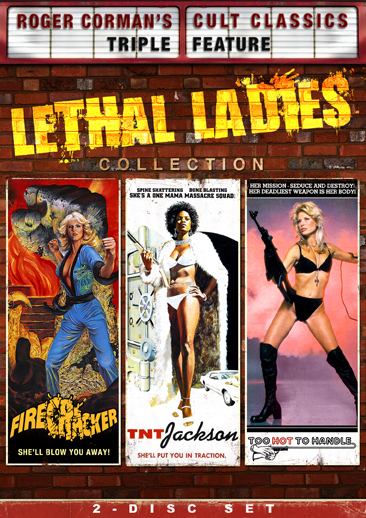 When female karate champion Susanne Carter (Jillian Kesner) goes to the Philippines to look for her sister who has disappeared, she stumbles upon a drug cartel and a tournament of no-holds-barred fights to the death in the action-packed Firecracker. Directed by genre specialist Cirio H. Santiago (TNT Jackson) and costarring Vic Diaz (The Big Bird Cage) and Darby Hilton (Malibu Express).

"They call me TNT," martial arts expert Diana Jackson (Jeanne Bell) announces upon her arrival in Hong Kong to look for her missing brother, heading smack into the city's worst area, a no-man's-land that is a haven for drug dealers, thieves and killers. TNT does not know that her brother has been brutally murdered by Charlie (Stan Shaw), an American who is bent on inching his way to the top of the city's drug-smuggling trade. He has no idea what he’s up against when he tangles with dynamite in TNT Jackson!

Contract killer Samantha Fox (Cheri Caffaro) accepts a mission to kill a group of gangsters in the Philippines, but problems arise when she falls for the Manila detective investigating the murders. Director Don Schain, who was married to Caffaro, directed her in several films prior to Too Hot To Handle, including Ginger, Girls Are For Loving and The Abductors.