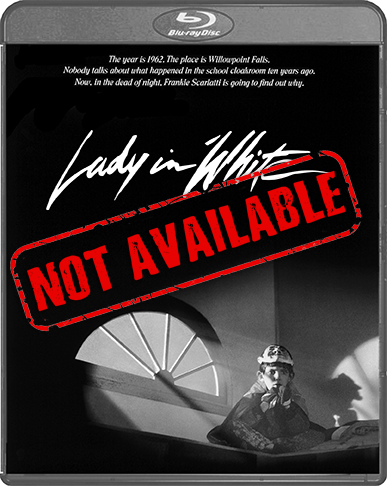 Lady In White (SOLD OUT)

"A ghost story that truly haunts. This one is going to scare you senseless." – Peter Travers, People

"Lady in White delivers nonstop thrills and will keep you in mounting suspense right through the chilling climax." – Entertainment Report

The ghosts of the dead can't rest without the help of the living in this terrifying horror film that's "one of the most intelligent and riveting ghost stories since Poltergeist" (LA Weekly). Starring Lukas Haas (Inception, Transcendence), Len Cariou (Blue Bloods), Alex Rocco (The Godfather) and Katherine Helmond (Soap, Who's the Boss), Lady In White is presented here in both its original theatrical release and the never-before-released full-length director's cut.

Frankie Scarlatti (Haas) lives in a small town with a deadly secret. For a decade, a serial child killer has eluded police, and the death toll continues to rise. Then, one night Frankie gets locked in his school and witnesses the ghost of the first victim being murdered. Now, aided by the girl's restless

spirit, Frankie takes it upon himself to bring her assailant to justice. But in a town with no strangers, the killer may be closer than he knows.