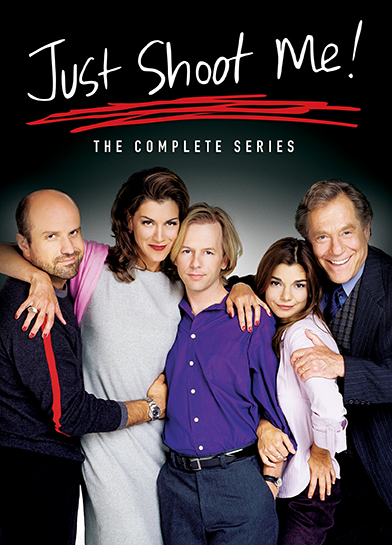 Just Shoot Me!: The Complete Series

Laughter is always in vogue!

A witty workplace comedy set in the offices of a high-fashion magazine, Just Shoot Me! chronicles the daily grind and hilarious misadventures of the mag's quirky staff. This complete series collection features all 148 episodes from the series' seven seasons, which were truly the very model of sitcom style.

*1966: Best Actor in a Supporting Role, Who's Afraid Of Virginia Woolf?

“Even 20 years later from the airing of the first episode, this show holds up. The jokes are just as funny and the interaction of the main characters just as fresh as if it were written today but probably much more difficult to air as some of the topics are not quite as P.C. as today’s times dictate. It’s not often that a sitcom can constantly entice laughter from its audience throughout each episode, but Don’t Shoot Me! is one of those classics and deserves to be remembered as such.” – Todd Karella, Cinema Sentries

“As dated as Just Shoot Me's humor and tonal approach might be in contemporary times, it's still an instantly likable show, thanks mostly to the palpable chemistry between the main cast. This set is especially a great deal for fans of the show.” – Oktay Ege Kozak, DVD Talk