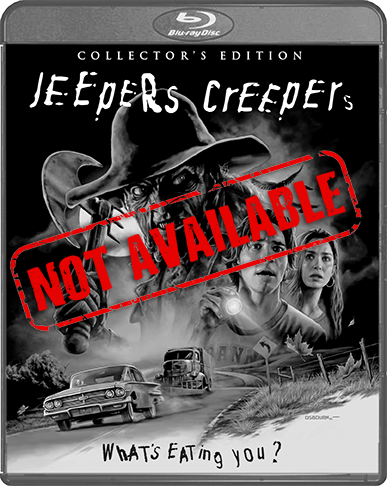 Product Note: As of May 12, 2020, this title has SOLD OUT. The limited-edition poster has sold out.

On a desolate country highway, two homeward-bound teens (Gina Philips, The Sickhouse, and Justin Long, Drag Me To Hell) are nearly run off the road by a maniac in a beat-up truck... and later spot him shoving what appears to be a body down a sewer pipe. But when they stop to investigate, they discover that the grisly reality at the bottom of that pipe is far worse than they could have ever suspected... and that they are now the targets of an evil far more unspeakable – and unstoppable – than they could have ever imagined!

"This film excels in building the tension for the two protagonists as they slowly but surely began to realize that the threat they face is (way) out of their league and the helplessness they feel is communicated strongly to the audience in the climax. Scream Factory continues its strong commitment to restoring and celebrating American Horror with this release of Jeepers Creepers: Collector’s Edition."  – Joshua Jenkins, ReDVDit

"Even though MGM released the film in a standalone package as well as a double feature with the sequel, Scream Factory’s release is the best edition to date, not just because the 2K remaster adds a slight boost to the picture quality, but because of the entire second disc FULL of special features not available on the prior releases. This is a true collector’s edition with a good transfer, reversible cover art, and a second disc of goodies to dig into. Recommended." – Mike Edwards, Home Theater Shack

"The Blu-ray from Scream Factory arrives with a slightly improved picture quality…while the audio presentation offers a spooky and fun atmosphere. The folks at Scream have a compiled a worthy set of supplements, making the overall package a must for devoted fans." – M. Enois Duarte, High Def Digest