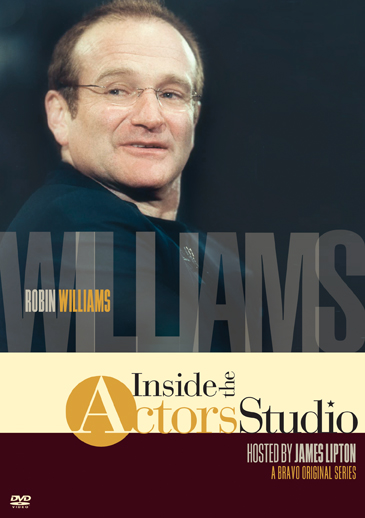 It's common knowledge that prominent actors and directors approach interviews, especially on television, with some caution. Over 12 years, presenting more than 200 of the most lustrous stars of film, theater, television and music, Inside The Actors Studio has earned the reputation of being a forum where guests can speak fearlessly, openly and honestly about the things that matter most to them: their craft and the crucial events of their lives and careers that shaped them as people and artists.

Robin Williams almost single-handedly paved the way for comedians who wanted to take their comedic timing and successfully turn it toward the world of drama. After his cinematic debut in Robert Altman's Popeye, Williams proved to the world time and time again that he is a dramatic force with which to be reckoned, turning in Academy Award-nominated performances with Good Morning, Vietnam, Dead Poets Society, The Fisher King and Good Will Hunting (for which Williams won the Oscar).

Through it all, Williams has kept his audiences rolling with laughter, whether it was onstage in his Emmy-nominated HBO special Live On Broadway, on the silver screen with critically acclaimed roles in films such as Man Of The Year or simply behind the scenes for exhausted film crews. This memorable episode of Inside The Actors Studio-the most requested of any-proves that Williams still has what it takes to touch the hearts of his fans with the one tool no one wields better . . . comedy.