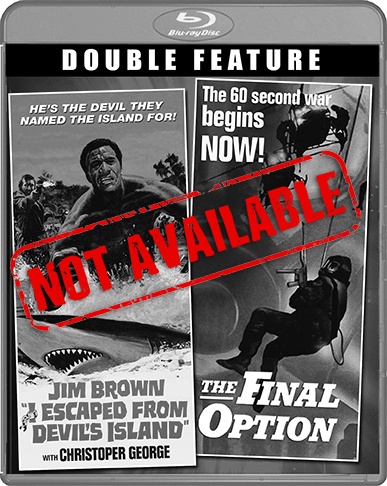 Lock and load your Blu-ray player – it’s time for a double-barreled blast of high-octane, high-definition action from Shout! Factory. This pair of hard-to-find action/adventure classics, available for the first time on Blu-ray, are a sure-fire night of entertainment for those who like their meat – and their movies – raw.

I ESCAPED FROM DEVIL’S ISLAND (1973, R) Sentenced to life in the world’s most notorious prison colony, two tougher-than-nails inmates enact the ultimate jail break…but find that trying to survive in the outside world is every bit as hellish as it was in the slammer. Football superstar Jim Brown and drive-in movie mainstay Christopher George star in this gritty actioner from the legendary Roger Corman.

I Escaped From Devil's Island / The Final Option [Double Feature]