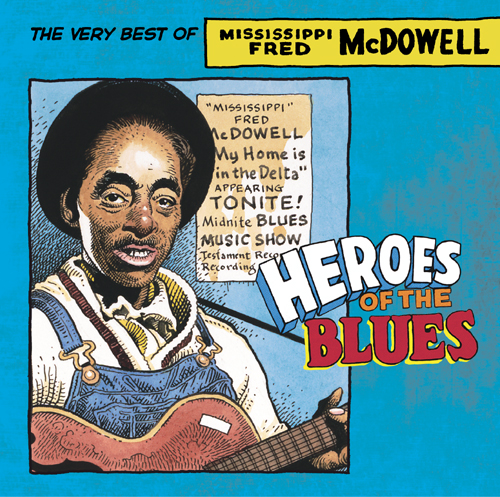 Heroes Of The Blues: The Very Best Of Mississippi Fred McDowell

When Mississippi Fred McDowell proclaimed on one of his last albums, "I do not play no rock'n'roll," it was less a boast by an aging musician swept aside by the big beat than a mere statement of fact. As a stylist and purveyor of the original Delta blues, he was superb; equal parts Charley Patton and Son House coming to the fore through his roughed up vocals and slashing bottleneck style of guitar playing. McDowell knew he was the real deal and while others were diluting and updating their sound , he stood out from the rest of the pack simply by not changing his style one iota. Though he scorned the amplified rock sound with a passion matched by few country bluesmen, he certainly had no qualms about passing any of his musical secrets along to his young, White acolytes, prompting several of them - including a young Bonnie Raitt - to develop slide guitar techniques of their own. Although generally lumped in with other blues "rediscoveries" from the '60s, the most amazing thing about him was that this rich repository of Delta blues had never recorded in the '20s or early '30s, didn't get "discovered" until 1959, and didn't become a full-time professional musician until the mid-'60s.