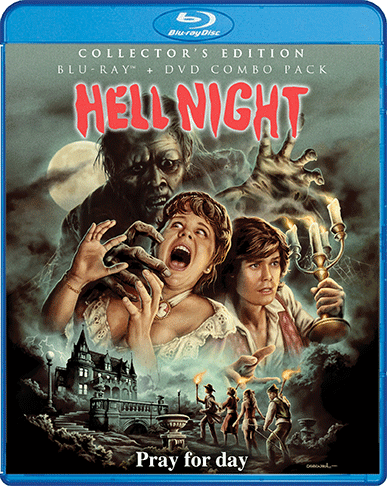 Product Note: The limited edition poster has SOLD OUT as of December 11, 2017.

SCREAM AND YOU'RE DEAD!

As an initiation rite into Alpha Sigma Rho fraternity, four pledges must spend a night in Garth Manor, twelve years to the day after the previous resident murdered his entire family. Two of the pledges, Marti and Jeff ignore the rumors that the now-deserted mansion is haunted by a crazed killer, until one by one, members of their group mysteriously disappear. Could this be a part of a fraternity prank ... or is a demented former tenant seeking revenge?

A Note About Our New 4K Scan:  We did an extensive search for the original film elements, but were unable to locate them. Therefore, this new transfer comes from a 4K scan of the best surviving archival 35mm film print of Hell Night. We did extensive color correction and film restoration to clean up any film damage. Because the print was missing some minor footage, so we have inserted a small amount of standard definition footage to deliver the complete film. We hope you enjoy this new restoration of this ‘80s horror classic.

“Hell Night’s hours and hours of special features raise this Scream Factory Blu-Ray disc to a must own for any Horror/Slasher Geek.  Recommended.” – A.W. Kautzer, The Movie Isle

“Hell Night is a very fun, well-made slasher film with a notable star from the 1980s heyday of the horror subgenre. Scream Factory doesn’t let their opportunity to release it go to waste either, with a terrific onslaught of brand new interviews for this Collector’s Edition. The film looks and sounds about as good as it’s going to with the materials available...Its truly the best edition of this film you’re going to find.” – Brandon Peters, Why So Blu

“The new Collector's Edition Blu-ray from Scream Factory is an upgrade over the Anchor Bay DVD and has loads of great extras - this sucker is stacked, and despite the PQ not being up to snuff I commend Scream Factory for finally bringing this beast to Blu-ray and stacking it to the tippy-top.” – Ken Kastenhuber, McBastard’s Mausoleum

"If you happen to like the film even a little bit, you definitely want to own this amazing Blu-ray Collector’s Edition release from Scream Factory. It has a solid video transfer and extra features that are almost as big as Linda Blair’s boobs. A no brainer purchase!" – Michael Tatlock, Mind of Tatlock