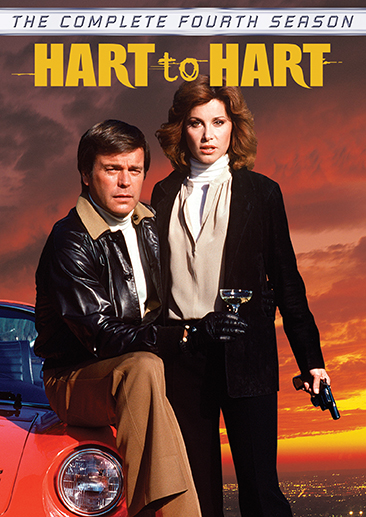 Robert Wagner (It Takes A Thief) and Stefanie Powers (The Girl From U.N.C.L.E.) star as the stylish and wealthy Jonathan and Jennifer Hart in the fourth season of the television favorite Hart to Hart. With the aid of their loyal friend and servant Max (Lionel Stander), the Harts are back for another jet-setting round of intrigue, adventure… and romance. Through their lighthearted chemistry and thrilling adventures, the Harts were a true power couple of '80s television, charming audiences and critics alike throughout their successful network run on ABC.

Created by Sidney Sheldon, both a bestselling novelist (Master of the Game, Windmills of the Gods) and hit television producer (I Dream of Jeannie, The Patty Duke Show), Hart to Hart is a smart and sexy detective drama. Season Four's twenty-two episodes feature sparkling dialogue, sumptuous costumes, and a roster of guest stars that reads like the invite list to a society party (including Eva Gabor, Cesar Romero, and Julie Newmar). Pack your bags and join the Harts on their most elegant adventures yet with Hart to Hart: Season Four.