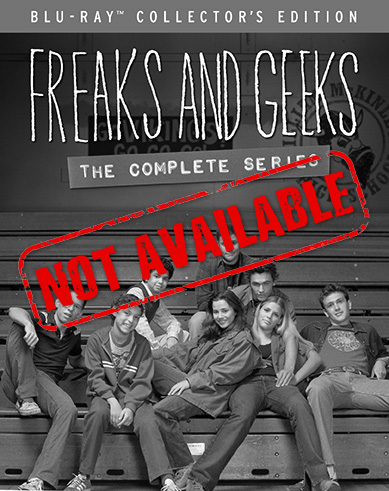 Freaks And Geeks: The Complete Series [Collector's Edition] (SOLD OUT)

What high school was like for the rest of us.

The modern classic, Freaks And Geeks, arrives on Blu-ray at last! Set in 1980 at the fictional McKinley High in Detroit, Freaks And Geeks focused on two groups of outsiders: the stoners, tough kids and bad girls; and the brains, nerds and squares. Although this Emmy award-winning series ran for only one season, it has remained a cult favorite and a benchmark of quality television.

A funny and authentic portrait of high school life with all of its horrors and triumphs, Freaks And Geeks resonates with anybody who has ever felt like they don't quite fit in. The series' legacy – including the ongoing success of many of its key personnel, from creator Paul Feig (Bridesmaids), to executive producer Judd Apatow (The 40-Year-Old Virgin), to cast members such as Linda Cardellini, Seth Rogen, James Franco, and Jason Segel – is undoubtedly secure in the hearts and minds of its passionate (and ever-growing) fanbase.

Jam-packed with a treasure trove of extras, this Blu-ray collection also features all 18 episodes in both original broadcast aspect ratio and a special widescreen presentation. Join Shout! Factory in celebrating this one-of-a-kind series with a set you'll Geek out over.

"While older shows coming to HD have created logistical nightmares for purists, Shout Factory handled the matter in the best way possible. Shout is giving you every possible way to watch the series. That’s so amazing to me. Truly Shout cares about the fans and this has become one of my favorite TV on Blu sets ever.” – AndersonVision

“Freaks and Geeks has a timeless appeal that speaks to anyone who might have felt like an outsider in high school, if only for a moment. A large but accomplished cast brings the motley crew of characters vividly to life, and some exceptional writing makes the situations feel real and authentic. Shout has done an exceptional job on this release, and fans should be very well pleased.Highly recommended.” – Blu-ray.com

“Freaks and Geeks remains a true television classic, an incredible representation of the highs and lows of adolescence, featuring tremendously memorable characters that are portrayed and crafted by one of most talented teams ever assembled for one series. That it only reached 18 episodes meant it never had a chance to disappoint. The same goes for this set, which puts an onus on being as complete a presentation as possible, from the two different aspect ratios to the seemingly endless array of bonus content…It couldn't be more highly recommended.” – DVD Talk

“'Freaks and Geeks' is one of the best shows ever made…There is enough comedy, heart, and soul in the series to last a lifetime. The new video and audio presentations are both excellent and the there is a treasure trove of extras here...This is a must own for everyone!” – High-Def Digest

“Fans of the series will be delighted to upgrade their DVD edition to Blu-ray with improved picture and sound, and not worry about losing any of the special features, plus a new interview with the two creative forces behind the show. Recommended.” – Home Theater Forum