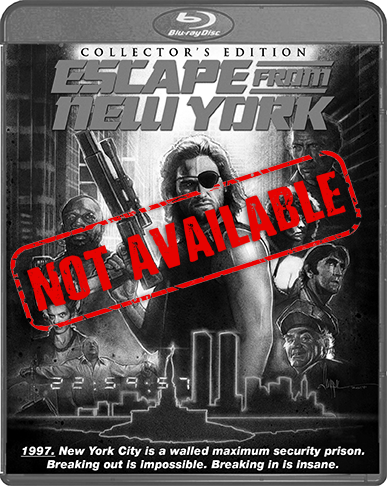 Product Note: As of August 6, 2020, this title is OUT OF PRINT. The limited edition poster has sold out.

“John Carpenter’s ‘80s action classic gets the Blu-ray treatment it deserves from Scream Factory. The disc is loaded with special features like a behind-the-scenes look at the visual effects that turn Manhattan into a prison.” – Entertainment Weekly

“This is a hefty package from Scream Factory with some updated extras, great cover art (or the original art if you’re a purist) that looks fantastic. It’s Escape From New York. It’s John Carpenter. It’s Kurt Russell. It’s Scream Factory. When you put these things together you get something special.” – DocTerror.com

“The two-disc “Collector’s Edition” truly lives up to its name with brand new high definition scans of the inter-positive, struck from the original negative for a beautiful 1080p experience.” – PopMatters.com