While best known as television’s original comedy genius, Ernie Kovacs also starred in movies, recorded an LP, wrote pieces for Mad Magazine, hosted radio shows, wrote novels, worked as a columnist for his hometown paper, The Trentonian and, perhaps least known, created visual art! According to Edie Adams, Ernie Kovacs’ wife and a performer on his shows, Kovacs was never without a pen and paper. Ever the creative genius, he was constantly working on ideas well into the night to create more on-air content for the next day. A chronic insomniac, Kovacs’ mind never stayed still.

For one of his shows, Kovacs created a favorite TV segment called “Illustrated Profuselies.” This segment found Kovacs drawing on paper while music played. The television audience got to watch Kovacs’ fertile mind create, for lack of a better word, doodles, set to music. What started out as an abstract image soon took shape and was revealed to the audience as Kovacs completed the image on camera. It was both a popular segment and a blessing, as the overworked Kovacs didn’t need to write scripts or perform in costume. "Illustrated Profuselies” were improvisational sketches – with sketches(!) – that allowed Kovacs to still be himself without worrying about the next day’s scripts for radio or television.

Shout! Factory is proud to present these limited edition, hand-numbered lithographs by Ernie Kovacs. Born as “Profuselies” and later recreated as the artwork you see here, these lithographs were printed more than fifty years ago to promote a one-hour special that aired on ABC on April 9, 1968 called “The Comedy of Ernie Kovacs.” Frequently drawn in pencil and sometimes in color, these rarely seen lithographs showcase Ernie Kovacs’ surrealistic, fertile and sometimes scattered visual creativity, and are on sale now.

Please note that while we have carefully inspected every print because these are vintage lithographs originally printed in 1968, they may exhibit some minor foxing*.

*Foxing is an age-related process of deterioration that causes spots and browning on old paper documents such as books, postage stamps and certificates. The name may derive from the foxlike reddish-brown color of the stains, or the rust chemical ferric oxide which may be involved. Paper so affected is said to be "foxed."

These lithographs are also available as an unframed set. 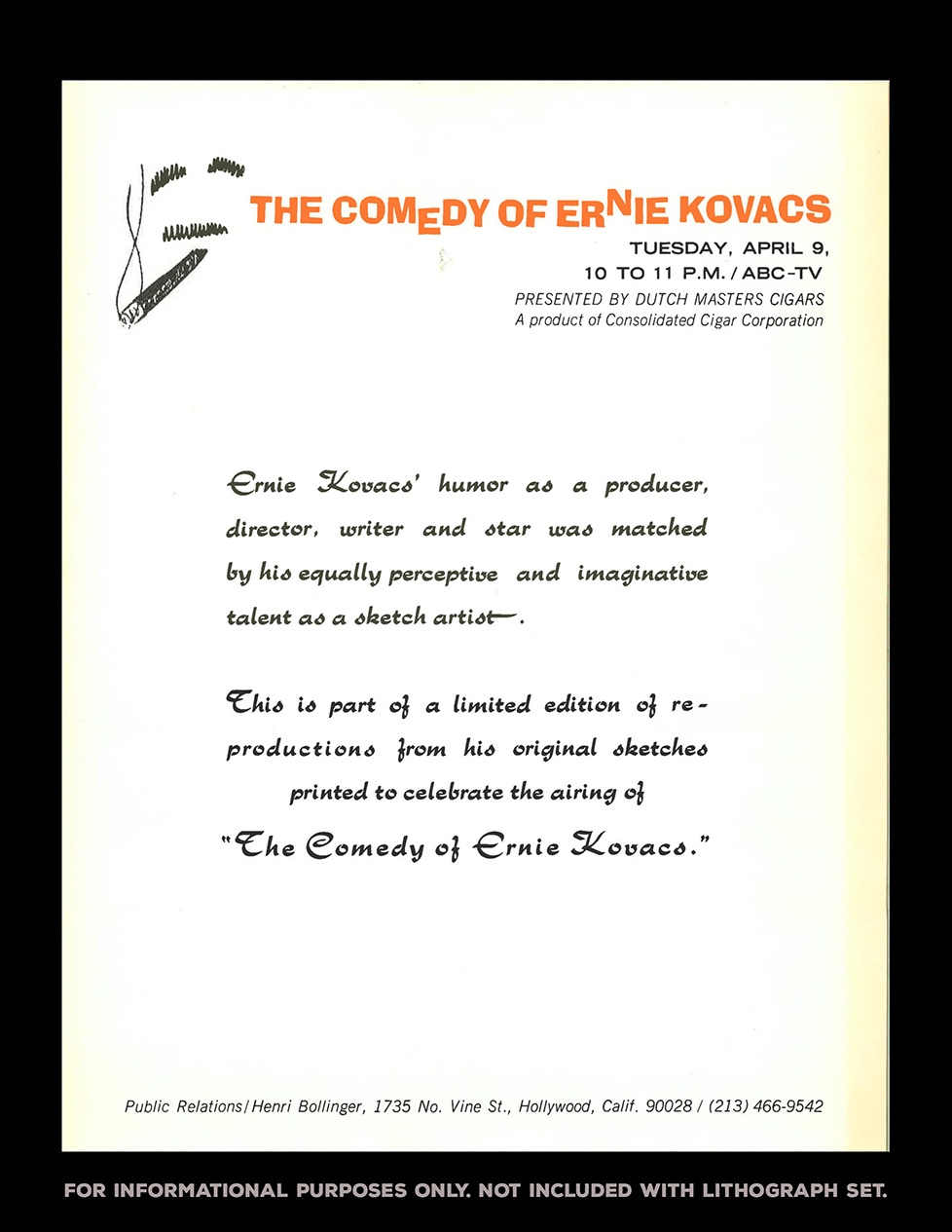