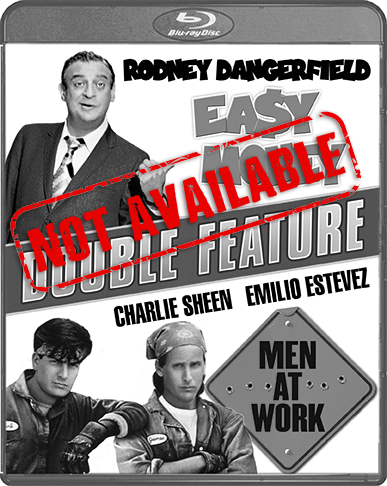 Shout! Factory presents a double shift of hardworking comedies for all you nine-to-fivers with Easy Money and Men At Work.

No cheating! No gambling! No booze! No smoking! No pizza! No nothin'! Monty Capuletti (comedy legend Rodney Dangerfield) is a hard-living baby photographer with a family that'd drive anyone to drink. But when his mother-in-law passes away, the irresponsible Monty stands to earn a big inheritance… if he can give up all of his well-worn vices for a full year. With temptation around every corner, can Monty give up his ways of hard living for some Easy Money?

The laughs don't stop with Charlie Sheen and Emilio Estevez in the anything-but-trashy comedy Men At Work. Rebellious garbage collectors Carl (Sheen) and James (Estevez) are always up to mix a little mischief with their sanitation engineering. But when they discover a little something extra in their usual pick-up (the body of a local politician), the two find themselves in more trouble than usual. Something about all this stinks worse than the garbage they collect — and it could easily spell doom for both their town and their lives!

Featuring Leslie Hope and Keith David (They Live) and written and directed by Estevez, Men At Work is a comedy you can't refuse (get it?)!