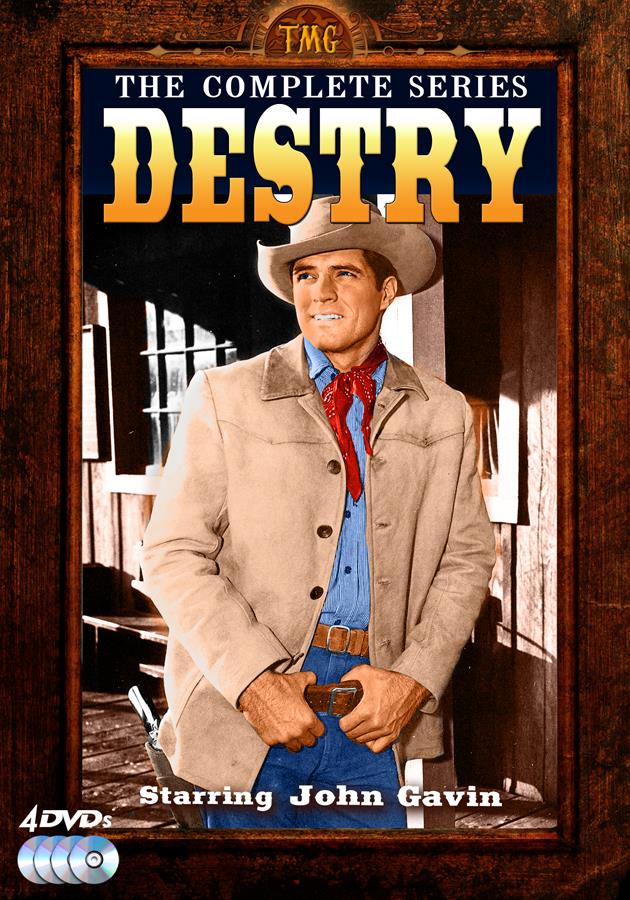 In the films, the main character was Tom Destry, a western lawman who was fast on the draw, but who preferred non-violent solutions in dealing with outlaws. In the television series, Gavin plays Tom’s son Harrison, a lawman who had been framed and sent to prison. Upon his release, Destry roams the west searching for the men who framed him but, like his father, his natural inclination was to avoid violence when he could. Destry has a serio-comic element that makes it great fun to watch and Gavin’s performance compares well with his predecessors, Stewart and Murphy.

Long thought to be lost forever, TMG and NBC Universal now bring you the complete series, all 13 episodes (over 10 hours) of Destry, re-mastered from original prints recently re-discovered in the Universal vaults, which is sure to please fans both old and new. Although lasting only one season, distinguished guest stars were featured each week, including Broderick Crawford, Don Hagerty and Claude Akins (The Solid Gold Girl), Lee Van Cleef and Barbara Stuart (Destry Had a Little Lamb), Una Merkel and Elisha Cook, Jr. (Law and Order Day), John Mitchum (Big Deal at Little River), Susan Oliver (One Hundred Bibles) and many more.