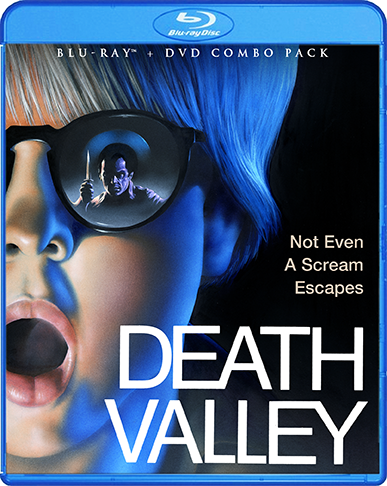 “Solid acting (especially from Peter Billingsley who delivers a simple, believable performance without any pretense) highlight this enjoyable splatter effort which doesn't shy away from the red stuff.“ – The Terror Trap

A divorcee, her son and her boyfriend are on a vacation in the beautiful but deadly Death Valley. What starts out as an ordinary, leisurely trip turns into a nightmare when they happen upon a murder and find themselves pursued by a maniac. Starring Catherine Hicks (Child’s Play), Paul Le Mat (Puppetmaster), Stephen McHattie (The Tall Man) and Peter Billingsley (A Christmas Story).

"Yep - I like this film. I am also happy to finally see a promotional photo for this film , thank you a lot IMDb! I have a copy of this film. I find this film a one-of-a-kind. I like it cause it's early 80s. And I LOVE what happens to the eat-too-much babysitter!" -IMDB

"In the early 80's, the Slasher craze kicked off due to the feverish demanding of creating new and exciting horror tales of murderous madmen terrorizing innocent people. Death Valley is one of many obscured titles that have been forgotten over the years due to so many other films that have been released in the genre. This is a very good film with an interesting premise.."-Super Reviewer Rotten Tomatoes

"This is something I've always been curious about and never had a chance to get into until the Shout Factory Blu-ray release.

A very watchable little slasher/thriller, with an interesting twist on the setting.

Well worth checking out if you're like me and have put it off for this long.