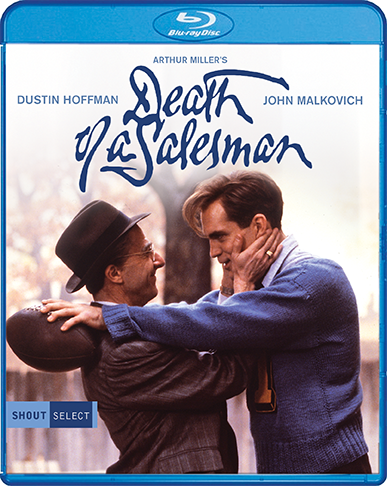 During the post-war boom period of the late '40s, Willy Loman is an aging, traveling salesman, who despairs that his life his been lived in vain. Facing dispensability and insignificance in a heated, youthful economy, Willy is not ready to part with his cherished fantasies of an America that admires him for personable triumphs in the marketplace. But the reality is far more difficult than that, and the measure of Willy's self-delusion and contradictions is found in his two sons. One, Harold, is a ne'er-do-well gliding on inherited hot air and repressed feelings, and the other, Biff, a mousy, retiring sort unable to reconcile the difference between his father's desperate impersonation of success and the truth.

“Shout! gives this film the gorgeous look and package it deserves, along with a few great features… Whether you’re new to the film, like me, or someone who saw it before and loved it, this is a release for you.” – Justin Harlan, Cinapse

“Miller's play, one of the most famous stage plays of his career, has been filmed numerous times but this version, directed by The Tin Drum's Volker Schlondorff must be among the best… Private Conversations…is a great look at the film that is nearly as engaging as the feature itself.” – J Hurtado, Screen Anarchy