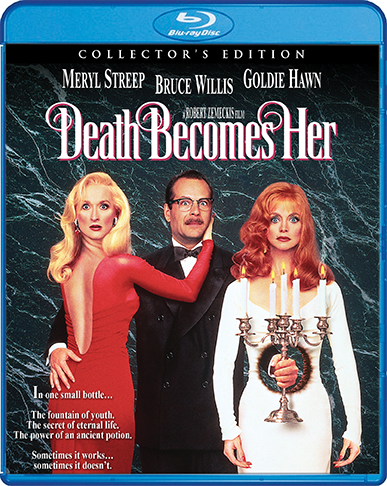 "A comedy with teeth and high style! Death Becomes Her has dazzling special effects and the stars are fun to watch." - David Ansen, Newsweek

Two narcissistic arch rivals (Streep and Hawn) discover the ultimate accessory – a potion that will keep them forever young – when they meet a mysterious enchantress (Isabella Rossellini, Blue Velvet) with deep ties to the Hollywood elite. But they get more than they bargained for when their newfound beauty only intensifies their vanity – and rivalry – in this fast-paced and very funny dark comedy that the Chicago Tribune calls "diabolically inventive."

**1969: Best Performance by an Actress in a Supporting Role: Cactus Flower

+1987: Best Performance by and Actor in a TV Series: Moonlighting

"The video master retains the movie’s cold, metallic look without lapsing into harshness. And, as is always the mark of a solid transfer for an effects-heavy catalogue release, you can clearly see some of the seams in the trick shots." – Eric Henderson, Slant Magazine

"Scream Factory have put together a nice-looking Blu-ray edition which includes a new Making Of documentary which talks about the project’s genesis and its SFX work, alongside a vintage promotional reel, trailer, and photo gallery. All in all, it’s a good excuse to revisit the movie (or get around to checking it out for the very first time.)" – Austin Trunick, Under the Radar

"The film speaks for itself, and this one is criminally underappreciated and, for its time, technologically groundbreaking. Looking nearly as clean and vibrant as it did back in 1992, Death Becomes Her comes highly recommended on Blu-ray. For fans, a must-buy." – Dustin Putman, The Blu File

"Death Becomes Her definitely has its moments and even though it was made in 1992 well before the visual effects technology had taken off to what it is today, it features some respectable effects, particularly with the hole in Hawn’s stomach…This ‘Collector’s Edition’ Blu-ray release offers good video and audio transfers and adequate features." – Movieman’s Guide