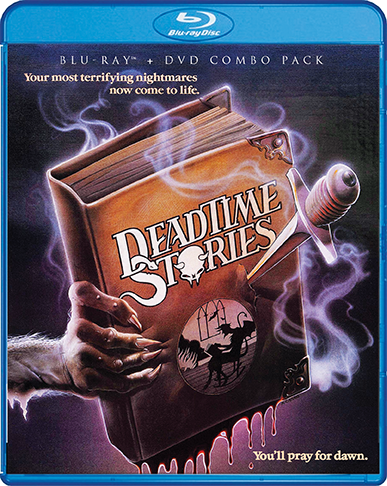 Recipient Of The Silver Certificate Of Achievement From The Academy Of Science Fiction, Fantasy And Horror Films

Your favorite nightmares come to life in a salute to the age-old bedtime story ritual. Travel on a mysterious journey to a medieval world populated by blood-crazed witches, evil experiments and captive maidens. Then from the catacombs and dark caverns of medieval Europe, you'll plunge into modern suburbia and the adventures of a female jogger stalked by a savage werewolf. Finally, sensuality will become macabre, black comedy as you follow the trail of three bank robbers who share their country house hideaway with a sweet murderess.

“I found myself completely charmed by Deadtime Stories, a horror-ish anthology favoring giggles over trembling fear as it skewers childhood fairy tales. It's so fun that I could easily shrug off its many, many issues with pacing and lackluster payoffs. While Deadtime Stories as a movie may be too divisive to recommend all that enthusiastically as a purchase sight-unseen, there's no denying that Scream Factory has assembled a hell of a Blu-ray release, from a beautiful new master to its two and a half hours of extras.” – Adam Tyner, DVD Talk

“This return to 'Deadtime Stories' after nearly thirty years may not have been the trip I'd hoped it would be, but I'd be lying if I said I didn't have some fun with it. Diehard fans of this Horror-Anthology will have a great time with this release from Scream Factory. With a fresh new transfer and some decent bonus features, there's a lot to appreciate about this release. 'Deadtime Stories' may not be the greatest entry in the sub-genre but it's certainly worth a look if you've never seen it. If you like your horror goofy and playful, this should be your kind of show. Worth a look.” – Matthew Hartman, High-Def Digest

Scream Factory rescues Deadtime Stories from years spent in budget DVD releases and a mistaken case of public domain with a new Blu-ray that offers a good-looking 1080p transfer and a host of solid bonus features…Deadtime Stories isn’t great, but it’s really entertaining and the kind of movie that makes me so fond of ’80s horror. There is imagination and creativity on display. There are cool practical effects and a sense of humor. The tone is one of fun above all else. These are all characteristics that were at their peak in the ’80s, so while Deadtime Stories may not represent the best that horror has to offer, it does successfully represent the best and most fertile period the genre has ever known.” – Patrick Bromley, Daily Dead