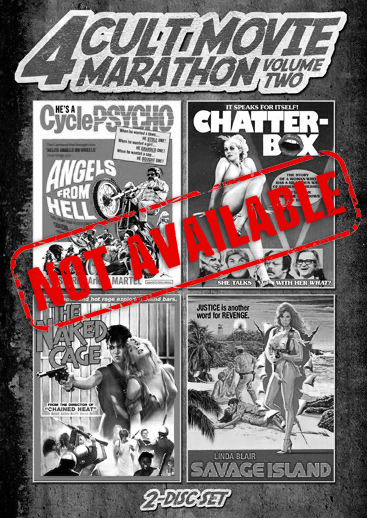 Cycle-psychos vs. the cops! A Vietnam war hero returns home and decides to build the ultimate outlaw biker gang. A war between the gang and the police is about to erupt!

From the director of Hell Night and The Concrete Jungle comes a tale of a starlet whose life and career are severely altered when her reproductive organs begin to sing and talk. Starring Candice Rialson (Candy Stripe Nurses) and Rip Taylor!

Michelle and Rita are arrested for theft and placed in the same cell. Their conflicts and personality clashes lead to screaming battles and cat fights before a prison riot brings deadly violence and a newfound respect for each other. Shari Shattuck (Arena) and Angel Tompkins (The Teacher) star.

A group of scantily-clad female prisoners sentenced to work under brutal conditions in a South American mine revolt against their captors with the aid of a band of jewel thieves. Linda Blair (Chained Heat), Leon Askin (Hogan’s Heroes) and Ajita Wilson (Hell Penitentiary) star.