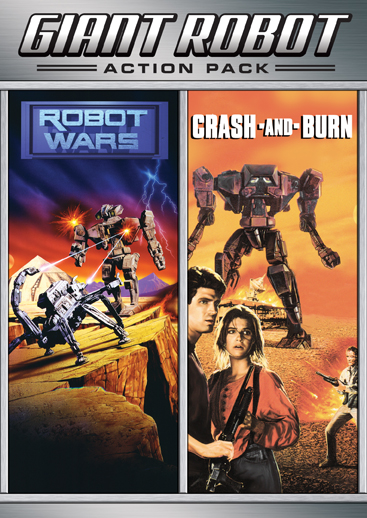 It's the year 2030, and man's worst nightmares have become an oppressive reality in Crash And Burn. Big Brother has come to life in the form of Unicom, an all-powerful conglomerate that emerged in the wake of a devastating global economic collapse. A group of dissenters has surfaced to fight Unicom's autocracy and stop the murderous Synthoid - a humanlike robot programmed to kill all those who pose a threat to the organization. Starring Paul Ganus, Megan Ward (Dark Skies), Bill Moseley (The Devil's Rejects) and Ralph Waite (Cliffhanger), and directed by Charles Band.

The ultimate battle between metallic giants begins in Robot Wars when a malicious foreign dignitary hijacks the last mega-robot on Earth, the MRAS-2, and threatens to unleash its crushing powers against the people of the Eastern Alliance. There's only one force magnificent enough to stop the MRAS-2 - a MEGA-1 robot hidden under the city. It's up to a renegade pilot, his engineer and a brilliant archaeologist to revive the MEGA-1 and reestablish world peace. Starring Don Michael Paul (writer/director Half Past Dead), Barbara Crampton (Re-Animator) and Lisa Rinna (Melrose Place).