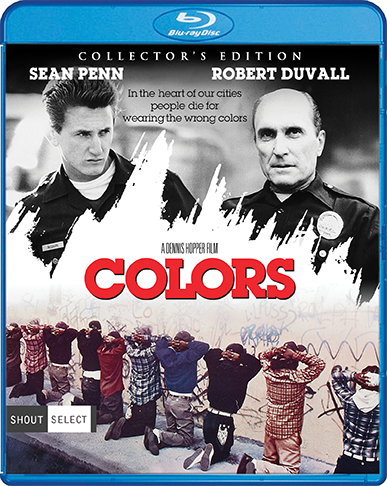 In the 'hood, all that matters are your colors... Bob Hodges (Robert Duvall) is a seasoned street cop who has learned a lot from long experience while his new, young partner, Danny McGavin (Sean Penn), has learned nothing - yet knows it all. Forced to work together in the L.A.P.D.'s renowned C.R.A.S.H. anti-gang unit, they set out to investigate a brutal gang murder. Hated and hunted by both sides, the cops soon find themselves trapped in the middle of a turf war. With nowhere to turn, they are ambushed, double-crossed and shot at in a take-no-prisoners street battle. As the violence escalates, these two diametrically opposed men must come to terms with one important fact - to stay alive they must come together!

“Colors was already a very good film and the additional footage helps make a few modest improvements in character development. Although this is not a frame-by-frame restoration, the transfer for Colors looks quite sharp. Shout has also ported over the bonus materials from Second Sight's disc and retained the trailer from MGM's DVD. Fans of Hopper, Duvall, Penn, and cinematographer Haskell Wexler will want to indulge in this package. HIGHLY RECOMMENDED.” – Dr. Stephen Larson, Blu-ray.com

“Shout! Select’s new Blu-ray is both rock solid on a visual and audio level and it includes some nice bonus features.” – Brandon Peters, Why So Blu

“Shout Select continues to release great under seen or misunderstood classics.  Colors isn’t just an under seen film it’s a misunderstood film.  Now, thirty plus years later with this release the film will finally get its rightful place at the table of truly great 80’s films.” – Adam Kautzer, Film Dispenser