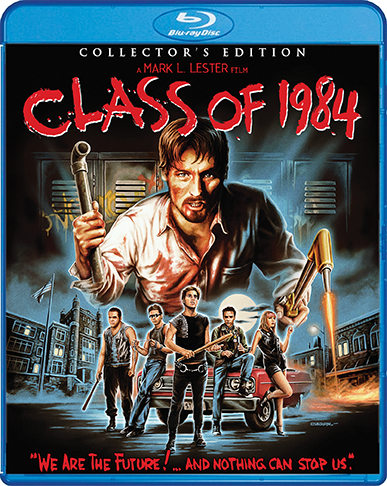 The teachers at Lincoln High have a very dangerous problem… their students!

Andrew Norris (Perry King, Lipstick, Mandingo), an idealistic and naive music teacher, has moved into a new community with his pregnant wife, Diane (Merrie Lynn Ross, General Hospital), only to find his new job is an academic abyss. Appalled by the crime-infested school, Norris soon crosses paths with its teenage kingpin, the shrewd and sadistic Peter Stegman (Timothy Van Patten, Catacombs, Zone Troopers). With Norris setting his sights on reforming Stegman and the young punk declaring war on his teacher, the duo is on a collision course for a fateful showdown.

Directed and co-written by Mark L. Lester (Class of 1999, Commando, Firestarter), Class of 1984 is one of the seminal cult movies of the early 1980s. While its vision of a decaying, violence-plagued inner city school seemed over the top in 1982, it sadly prophesied the future of American education. With an original story and screenplay co-written by genre veteran Tom Holland (Fright Night, Child's Play, Psycho II, The Beast Within), the film is also notable for its great cast, which includes Lisa Langlois (Deadly Eyes, The Nest), Roddy McDowall, Stefan Arngrim (Fear No Evil) and Michael J. Fox in an early role.

"Scream! Factory’s Collector’s edition is a great little buy; the picture is very decent being bright and detailed…The extras are quite plentiful being a mixture of old and new and for such a little film, Scream! have really looked after this grubby feature that has defied the test of time and remains as popular and as relevant today as ever it was." – Simon Crust, AV Forums

"To be honest, I never would have imagined the movie to look this amazing…With a healthy assortment of supplements, the overall package make a fine addition to the cult collection. Recommended." - M. Enois Duarte, High-Def Digest

"Scream Factory has done an incredible job with this Collector's Edition and trust me that this is the best version Class of 1984 you're ever going to get. The new high-definition transfer of the film from the interpositive is gorgeous and this sounds great too." – Sean McClannahan, Daily Dead