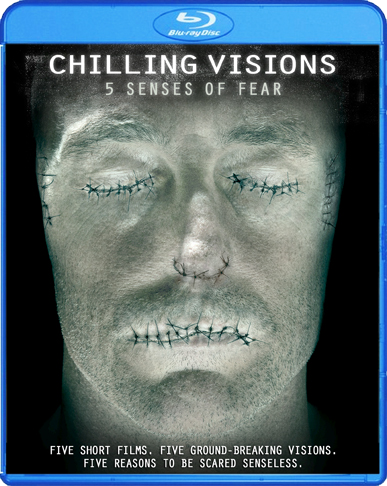 SMELL – Directed by Nick Everhart. Left by his wife and stuck in a dead-end job, Seth Kyle’s life is the definition of undesirable…until a mysterious saleswoman shows up at his door offering him “a scent to die for.” Armed with a new air of self-confidence and a never-ending barrage of attention, Seth quickly learns that the smell of success comes with a deadly price.

SIGHT – Directed by Miko Hughes. Unsatisfied with his own version of reality, an optometrist develops a machine that can harness the visions of all of his patients. In an attempt to show his favorite patient’s abusive boyfriend the error of his ways, the doctor injects a series of viciously brutal images into his mind, leading to a visceral bloodbath of reality and hallucinations.

TOUCH – Directed by Emily Hagins (My Sucky Teen Romance). After a car accident leaves him stranded in the middle of nowhere, a 12-year-old blind boy stumbles into the stomping grounds of a sadistic serial killer. Using his memory and strong sense of touch, he must navigate through the unfamiliar territory as the killer quickly closes in.

TASTE – Directed by Eric England. A street-smart hacker is brought in for a job interview with a mysterious corporation. He soon learns that the company is led by a man-eater who has impeccable taste…and doesn’t take “no” for an answer.

HEARING – Directed by Jesse Holland and Andy Mitton (YellowBrickRoad). While researching an urban legend about a song that’s long been thought lost, a group of friends piece together all the existing recordings of it, bringing it back to life for the first time in decades. Before long, they discover the bone-chilling truth of what happens to anyone who listens to it and why it was buried for so long.