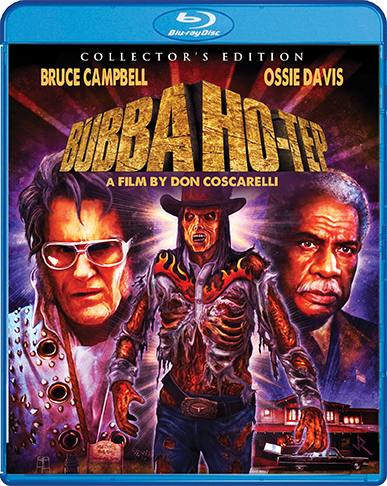 Bruce Campbell (Army of Darkness) "gives his greatest and most entertaining performance to date" (Premiere) as an aging and cantankerous "Elvis" in this "zinger-filled crowd-pleaser" (The Hollywood Reporter) from writer-director Don Coscarelli (Phantasm, John Dies At The End)! When mysterious deaths plague a Texas retirement home, it's up to its most sequined senior citizen to take on a 3,000-year-old Egyptian mummy with a penchant for cowboy boots, bathroom graffiti and sucking the souls from the barely living!

"Scream Factory’s new Blu-ray release is absolutely the definitive version to own. With a great transfer and an immense amount of extras, that cover just about everything you would want to know, there’s no reason not to own it. Highly recommended." – The Digital Bits

"Bubba Ho-Tep still rocks after all these years and has proven to be one of horror’s best all time comedies. Everything on paper works against this film, but they pull it the hell off. Scream Factory’s new edition proves to the be the essential release for it as it ports over everything and then adds some wealthy material as well. The film looks and sounds terrific, better than it ever has." – Why So Blu

“The true draw here, though, will be for the Joe Lansdale fans, in the form of a new, full-length commentary track that gets into the origins of the film, the inspirations for the original short story, and the author’s career and background.” – Under The Radar Magazine