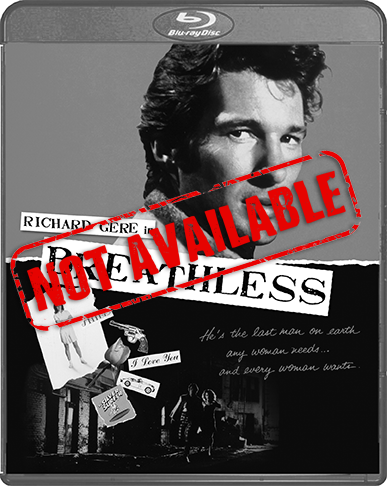 "Audacious. The stars are… tangibly hot for each other and every element of the film jams responsively with the soundtrack." – The Village Voice

When Las Vegas lowlife Jesse Lujack (Gere) becomes a wanted fugitive, he hightails it from Sin City to the City of Angels in order to track down Monica (Kaprisky), a beautiful French woman studying at UCLA, planning to convince her to escape to Mexico with him. Finding herself drawn in by the sheer magnetism of Jesse and his dark world, Monica can't help but fall for him and she soon finds herself swept up in his run from the law. But as the noose around the two begins to tighten, Monica must decide whether to stand by her ne'er-do-well lover… or save herself.

Inspired by a classic French New Wave film, Breathless is a gripping and sexually charged thriller, finally available on Blu-ray from Shout! Factory.