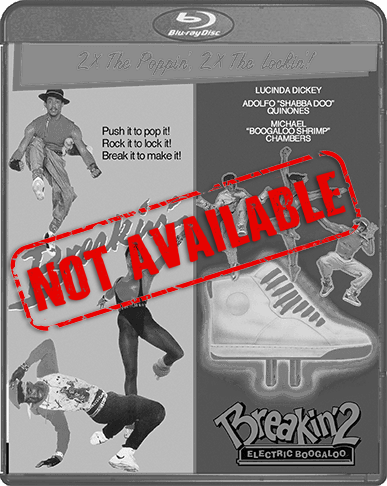 In Breakin', rich girl Kelly learns the moves of the street under the tutelage of Ozone and Turbo. In spite of her disapproving dance instructor, Kelly overcomes the odds to become a poppin' and lockin' princess – and the secret weapon in Ozone and Turbo's battle against rival dance team Electro Rock. The beat doesn't slow down for the slammin' sequel to Breakin', Breakin' 2: Electric Boogaloo! A hip-hop homage to the "hey kids, let's put on a show!" musicals of Hollywood's yesteryear, this fly follow-up finds our heroes coming to the rescue of a community center facing demolition at the hands of a greedy real-estate developer. Featuring even more fancy footwork than the original film, Breakin' 2: Electric Boogaloo is unquestionably the greatest film (title) of all time.

Join the crew today for a double feature delivered f-f-fresh from Shout! Factory!