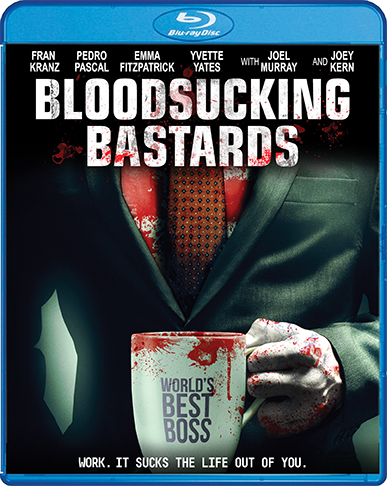 "Enough Gore And Laughs To Fill Even The Biggest Of Caskets." – Steve Barton, Dread Central

An action-packed vampire comedy in the vein of Office Space and Shaun of the Dead, Bloodsucking Bastards stars Fran Kranz (Cabin in the Woods) as Evan Sanders, a dutiful and overworked employee stuck at a soul-killing corporation with his beautiful girlfriend, Amanda (Emma Fitzpatrick, Significant Mother), and his slacker best friend Tim (Joey Kern, Beneath). Evan's world begins to crumble when Amanda dumps him and his boss, Ted (Joel Murray, God Bless America), hands his coveted promotion to his nemesis Max (Pedro Pascal, Game of Thrones). But just when Evan's convinced that life couldn't bite any harder, his office mates start going through disturbing changes… and bodies begin to pile up. Evan must find a way to stop the evil brewing amidst the cubicles and water coolers, win back Amanda, and rescue his workplace pals before his life and career go from dead-end... to just dead.