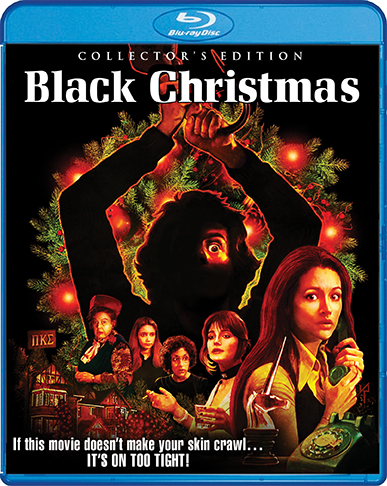 The college town of Bedford is receiving an unwelcome guest this Christmas. As the residents of sorority house Pi Kappa Sigma prepare for the festive season, a stranger begins to stalk the house.

A series of obscene phone calls start to plague the residents of the sorority and it becomes clear that a psychopath is homing in on the sisters with dubious intentions. And though the police try to trace the calls, they discover that nothing is as it seems during this Black Christmas. "Stuffed with extremely tense moments, chilling cinematography, amazing characters and long-lasting dread… [this] genuine classic is completely deserving of every bit of respect and admiration it's picked up over the last 40 years" (addictedtohorormovie.com).

"Black Christmas remains a bone-chilling and terrifying horror masterwork. Shout! Factory has really assembled an "Ultimate Edition" for the film, cobbling together nearly all the bonus materials available on previous DVDs and Blu-rays…I endorse this release with my HIGHEST RECOMMENDATION." – Dr. Stephen Larson, Blu-ray.com

"Black Christmas birthed the slasher genre back in 1974 and remains a highly influential piece of horror cinema to this day. It’s a taut thriller with a great cast and frights that linger well after the credits roll. Shout! Factory’s choice to retain the film’s 70’s patina should satisfy classic horror fans." – Bruce Douglas, High Def Digest

"Scream Factory’s Blu-ray release is more than welcome with a beautiful transfer of the film and a massive amount of extras. It’s a must-own and will likely become regular holiday viewing for many horror fans. Highly recommended." – Tim Salmons, The Digital Bits

"Scream Factory has done us a favor by rolling over special features from both releases resulting in several interview segments and mini documentaries put together from different years making the completest in me very satisfied. This collector’s edition comes highly recommended for both fans old and new." – Jon Abrams, Daily Grindhouse

"Black Christmas is the quintessential holiday horror film, and Scream Factory has done an excellent job with this collector's edition, amassing all previous extras along with a new beautiful 2k scan of the film." – Ryne Barber, The Moon is a Dead World