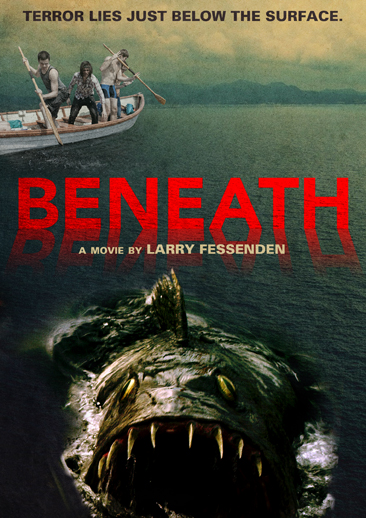 “3 out of 4 skulls - Beneath is the kind of movie where schlocky thrills are the bait, but it winds up giving you more to chew on.” – Michael Gingold, Fangoria

When a group of young friends commemorating their high school graduation take a trip to the remote Black Lake, their celebration turns into a nightmare. Trapped in a leaking boat with no oars, the teens face the ultimate test of friendship and sacrifice during a terror-stricken fight for survival when they find something is living beneath the surface.

"Beneath is a throwback piece to the “big killer fish” cult cinema done with modern sensibilities instead of trying to grindhouse it up as to give an instant excuse or spoon-fed reasoning for the film’s tone and nature.  It’s a treat to see an actual “living breathing” practical effects creature, fully constructed from the ground up, as we rarely get to see that kind of beast anymore.  The film is darkly comic and rewards its audience for having to hang with such despicable characters by having them ruthlessly turn on each other" -Why So Blu

"Beneath shows how humans can change under stress, as these young adults resort to ritually voting someone off the boat as a distraction to save the rest. This component of Tony Daniel and Brian Smith’s screenplay could come off as unbelievable, but the actors make it feel real with their frenetic desperation"-Daily Dead