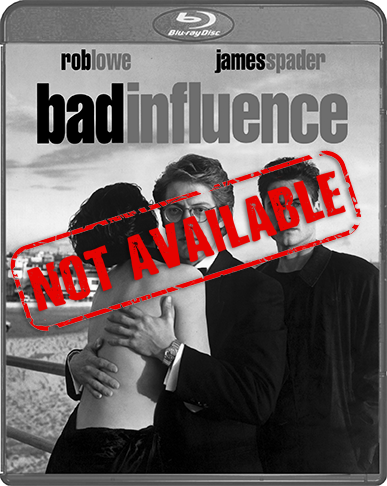 James Spader (The Blacklist) and Rob Lowe (The West Wing) star as two men on a collision course with fate – and each other – in the underrated gem Bad Influence.

Quiet, unassuming financial analyst Michael Boll (Spader) lives a successful-yet-timid life, lacking in risks or rewards. When he crosses paths with the enigmatic Alex (Lowe), the two form a friendship based on ever-increasingly bold behavior. When Michael's new pal pushes things too far, however, Michael wants out… but the mysterious Alex has no desire to set him free from the seductively dangerous lifestyle he's dragged him into.

A sexy and suspenseful drama in the vein of Hitchcock's Strangers on a Train, Bad Influence is a crackling thriller from writer David Koepp (Death Becomes Her, Apartment Zero) and Oscar® winner* and director Curtis Hanson (L.A. Confidential).