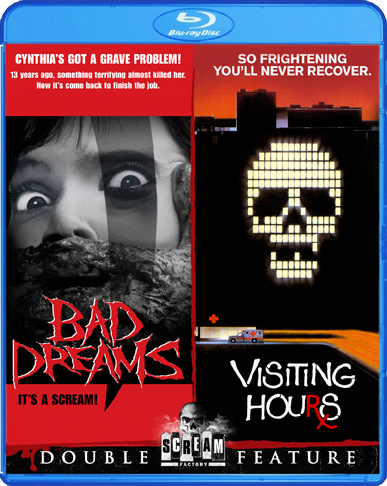 "I don't know who it is at Shout Factory that picks out the movies for their double features, but I'd love to give the guy a medal. One of these double features swirled around campy '80s horror movies with monsters coming out of TVs. Another shamelessly showcased busty, since-famous actresses getting all kinds of naked in mediocre thrillers" -DVD Talk

"Par for the course, Scream’s presentation of the material is yet another home run, making it a must-own for fans or even the uninitiated." -Daily Dead

"Presented on Blu-ray for the first time by Scream Factory, this double feature of Bad Dreams and Visiting Hours is only for the most diehard horror-hounds. In terms of audio and video quality, these films have never looked better" -Geeks of Doom