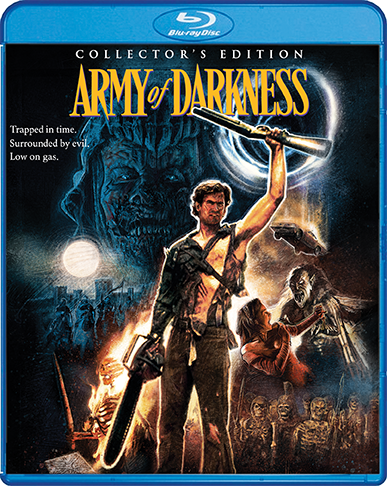 "A masterpiece of lunacy and oddball creativity." – From The Balcony

Bound in human flesh and inked in blood, the ancient "Necronomicon" – the Book of the Dead – unleashes unspeakable evil upon mankind in director Sam Raimi's (Darkman, Drag Me to Hell) outrageously hilarious third chapter in his Evil Dead Trilogy.

Back to do battle with the hideous "Deadites," Bruce Campbell returns to the role of Ash, the handsome, shotgun-toting, chainsaw-armed department store clerk from S-Mart's housewares division. Demonic forces time warp him – and his '73 Oldsmobile – into England's Dark Ages, where he romances a beauty (Embeth Davidtz, The Amazing Spider-Man) and faces legions of the undead. Can Ash save the living from the evil dead, rescue his girlfriend, and get back to his own time?

“ARMY OF DARKNESS: Collector’s Edition is the King of Boomsticks… There has never been a definitive version of Army of Darkness… (dramatic pause) UNTIL NOW! Scream Factory, whose work making terrific special editions of horror titles really can’t be overstated, has compiled what is surely the best, last, and only Blu-ray of AoD you’ll ever need to buy.” — Kyle Anderson, Nerdist

“Army of Darkness is one of the most beloved movies in the history of the Horror Genre, and now thanks to Scream Factory, it's getting the Collector's Edition that it deserves!” — THE HORROR CLUB

“This Scream Factory release does a fine job gathering up every possible version of the film — the theatrical cut, the director’s cut, the international cut, and the TV cut — and filling it all out with a generous selection of extras, including a new making-of doc, deleted scenes, an audio commentary and more. Hail to the king, baby.” — Keith Phipps, UPROXX